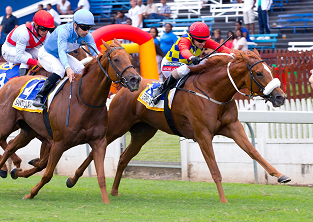 Trainer Glen Kotzen was surprised his Duke Of Marmalade filly Temple Grafin had been overlooked by on course television pundits before winning the Grade 3 Umzimkhulu Stakes over 1400m at Greyville on Sunday and he was looking forward to a good SA Champions Season for her and others in his string, including former Cape Derby winner Eyes Wide Open.

He said, “I thought Temple Grafin could have been mentioned considering she won the Grade 3 Debutante over 1200m at this course last season and she finished second to the highest rated three-year-old filly in the country, Clouds Unfold, over this trip in the Grade 2 Western Cape Fillies Championship.

“This filly never cracks a draw and we imagined she would have to go to the front from her draw but Anton Marcus then suggested instead of making it so hard on her why not give her a chance and drop her out.”

As result she ran on strongly to win by 0.40 lengths. It was a triumph for Drakenstein Stud stallion Duke Of Marmalade as another of his daughters, Santa Clara, finished runner-up.

The Duke Of Marmalades appear to get better with age and Kotzen said, “Ant Mgudlwa rode Temple Grafin in work last season and he couldn’t believe how much she had matured when he saw her for the first time at Summerveld this season. She has really matured and grown bigger and stronger.”

The aim is now the Grade 2 KRA Fillies Guineas.

Kotzen is adamant she will stay the trip.

He said, “She is out of a Grey’s Inn mare who won third time out over 1900m. We just hope she cracks a draw for a change.”

Kotzen said Eyes Wide Open had been “cruising” in his work and he will make his first Champions Season appearance in the Sledgehammer. The aim is to get him into the Vodacom Durban July with a nice galloping weight.

He was also hoping to get Herodotus into the July, whom he rates as a “proper” horse. This Trippi colt, who finished third in the Grade 1 GBets Cape Derby, is back in Cape Town and would likely run in the first two legs of the Cape Winter Series before heading for KZN, although Kotzen said he would play it by ear. – Gold Circle