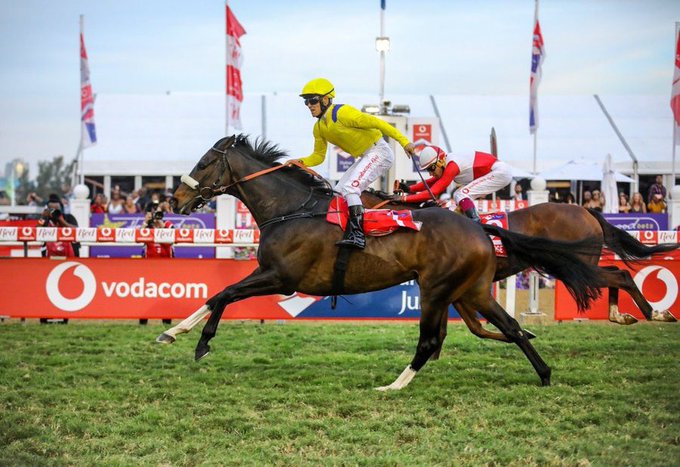 Do It Again can be named among SA greats after Vodacom Durban July double but Hawwaam withdrawn at start.

Vodacom Durban July history was made at Greyville on Saturday afternoon.

The winner was Do It Again who wrote his name into the record books by living up to his name and taking the No 1 spot for the second successive year. It was a magnificent performance from the four-year-old gelding who was quite correctly described by trainer Justin Snaith as one of the greats of South African racing.

Unfortunately, the race was marred when Hawwaam, who had been a gentleman through the build up to the race, played up as he went into the stalls, hurting his left hind leg and was withdrawn by the vet.

“Under the circumstances the vet did the right thing,” said trainer Mike de Kock. “But I don’t want this story to grab the headlines and detract from the brilliant victory of Do It Again.”

Snaith’s charge, owned by Nick Jonsson, Bernard Kantor and the late Jack Mitchell, became only the fifth horse since the inception of the Durban July to win the race in successive years. The last horse to do it was El Picha in 1999 and 2000.

However, much of the credit for the success must go to jockey Richard Fourie. Like all champions, he knew exactly how much horse he had under him and at no stage did he panic, even when Gavin Lerena escaped on Rainbow Bridge 300m from home.

Do It Again, carrying top weight of 60kg, came charging up the centre to run Rainbow Bridge out of it 50m from home to win by 0.40 lengths.

Third place went to Twist Of Fate, a further 1.30 lengths back, with Eyes Wide Open a neck further back fourth, Miyabi Gold, fifth and Camphoratus in sixth.

This is the second Durban July win for Fourie, his first coming in 2014 when Legislate got the race on an objection. “At last I will be able to do my own lap of honour,” he said. “This horse is simply remarkable. He is such a smart horse, very intelligent and he definitely has big-match temperament.

Return Flight led the field at a pedestrian pace from Head Honcho and Twist Of Fate, who was perfectly placed on the rail from his wide draw by Nooresh Juglall. Lady in Black and Rainbow Bridge were behind them and only then came Do It Again.

Return Flight did not have much left in the tank and Lerena swept into the lead aboard Rainbow Bridge, looking a winner with 200m to run.

That was until Fourie brought Do It Again on the scene.

“He has proved how good he is,” said Snaith, “and he has now proven he should be considered among the greats of South African horseracing.”

Tweet
Published in Latest News
More in this category: « If Cash is your King, OTT Vouchers are your thing! Star line up for Champions Cup »