Enable not done yet! 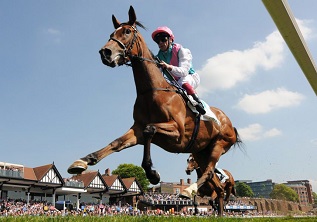 Enable will stay in training next season, owner Khalid Abdullah has announced.

The five-year-old came up short in her bid for a historic third Prix de l’Arc de Triomphe earlier this month, but Abdullah has decided to race on with her next year, with another crack at that race a possible target.

In a statement, Abdullah’s racing manager Teddy Grimthorpe said: “Prince Khalid has decided to keep Enable in training for 2020.

“She has come out of the Prix de l’Arc de Triomphe in good form and will not race again this year.

“Her racing programme will be determined entirely on her well being, so no racing plans will be announced at this stage. The Prix de l’Arc de Triomphe remains an important target.”

Her defeat at ParisLongchamp brought to an end a 12-race winning streak, which included two King George VI And Queen Elizabeth Stakes, a Coral-Eclipse and a Breeders’ Cup Turf.

Trained by John Gosden, Enable has already amassed over £10 million in prize money with her only other defeat coming at the hands of former stablemate Shutter Speed on just her second start.

Grimthorpe later elaborated on the decision and said: “There are no plans at all at the moment regarding which races she’ll run in.

“She’s come out of the Arc in great shape, which gave the Prince the encouragement to take this decision.

“Hopefully all goes well and she gets the chance to go for a third Arc next year.”

Frankie Dettori described himself as “absolutely buzzing” after it was announced superstar mare Enable will stay in training next year.

Dettori admitted he shed a tear after she came up just short in her attempt to win the Prix de l’Arc de Triomphe for a third time, being beaten just under two lengths by Waldgeist earlier this month.

“It’s amazing news as she is the world’s favourite horse. To have one more year with my special girl is amazing,” Dettori said.

“The decision about keeping her in training was out of my hands, so to hear this news is fantastic.

“I can’t wait to sit back on her again on the racetrack next year.

“I’m absolutely buzzing about this. To me she has been the horse of a lifetime and to have one more year is wonderful.

“If we can get her to the Arc again next year and try to claim that record-breaking third win in the race, it would be brilliant.” – Sportinglife.com